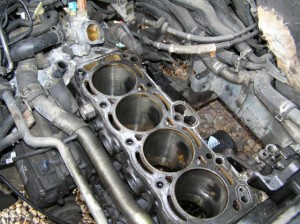 This Supercharged 4AGZE engine was stripped down in the chassis for inspection following various problems. It had been rebuilt previously but to a very poor standard. You can see the poorly honed bores (wrong honing angle) which had subsequently worn. There were other problems so it required a complete rebuild. 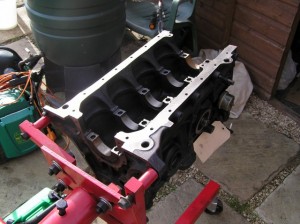 Once stripped down the block was sent away for reboring 0.5mm oversize and honing, the crank was reground undersize, the top and bottom faces of the block were machined and all new Toyota components were purchased for reassembly. 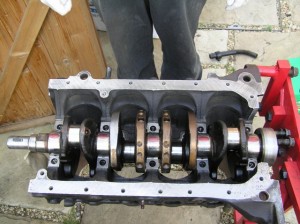 With the top half of the new main bearing shells fitted to the block, Plastigauge was used to check the bearing clearance. The same would later be done with the big end bearings. 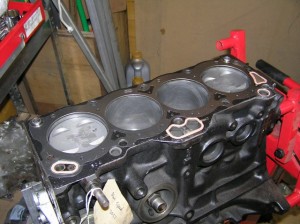 With the crank main bearings checked the new oversize pistons were fitted with their rings (with the rings carefully orientated) and fitted inside their bores. You can see that this time the honing has been done correctly.

This engine was quite a powerful 4AGZE, running aftermarket cams, an Omex 400 ECU and an oversize pulley and a chargecooler. It was decided to fit ARP head studs and an TRD head gasket. Here is the block ready to receive the head… 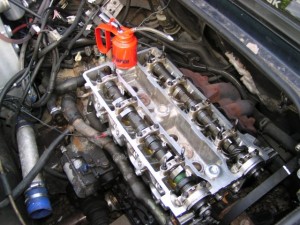 And here is the head torqued down, inlet and exhaust valve clearances checked and adjusted, nearly there!

This engine was subsequently transplanted into another chassis and is currently racing in the Toyota Sprint Series in turbocharged form.