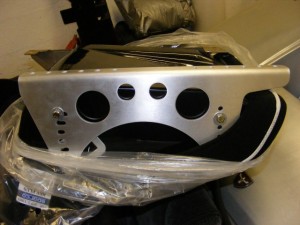 These side mounts were purchased to fit the Sparco seats in a MR2 Mk2 turbo used for sprinting. Unfortunately due to the custom made roll cage and the height of the driver, (causing helmet to rollcage issues) these were totally unsuitable. The seat was required to be mounted as central and as low as possible. 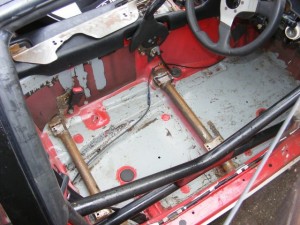 The seats had been previously installed on these mounts. They are too high. The sidemounts (one is shown at the top left of the picture) had been cut away to allow the seat to sit below the mount. It really wasn’t satisfactory as the sidemount retained no strength at all. 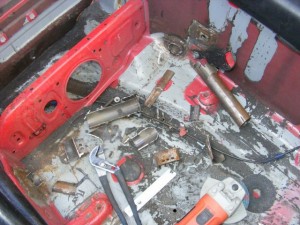 After a lot of grinding the old tubular mounts were removed. They simply could not be used because the base of the seat must basically sit on the floorpan. In fact the floorpan was modified to get the seat as low as possible (more later). 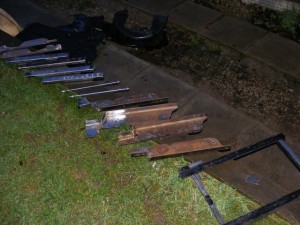 Steel mounts must be at least 3mm thick (Blue book). I had some 3mm thick steel plate bent from which I made the new sidemounts. Bottom right is a flat frame used to ensure the mounts are installed flat, next four items are the bent and stepped side mounts, the two tierods used to space the sidemounts correctly, the four 50 x 25mm box sections that will be welded to the car.